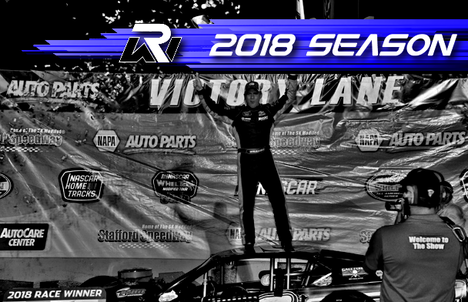 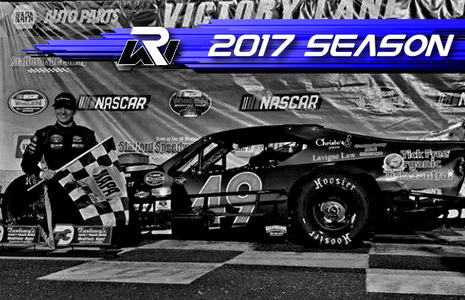 Summary of 2017 Season
Stafford Motor Speedway- Running the number 49 SK Modified as a tribute to his late Grandfather, Fred Peckham. Ronnie fulfilled his promise and put that car on the Podium for a second place finish in the Spring Sizzler, and in Victory Lane in the sixth race of the season.  Ronnie led the SK Modified points battle for half the summer and never fell lower than third for the entire season entering the Fall Final only 8 positions outside the SK Modified Championship.  He finished the season 3rd in points and with this stat line:  17 starts, 1 win,  5 podium finishes, 9 top 5’s and 14 top 10’s.  Completing his 4th year racing SK Modifieds at Stafford, he currently sits tied for 17th on the SK Modified All Time win list.

NASCAR Weekly National Championship- Finished the year 58th Nationally in the Division 1 Points Standings and  6th in the State of Connecticut Championship points.

NASCAR Whelen Modified Tour-  Ronnie raced the final 10 events for the Tour which started with an Impressive 2nd place qualifying effort at Riverhead Raceway, and ran top 4 for 260 laps until a motor issue sidelined him for the final 40 laps.  Other highlights included, a 3rd place qualifying effort at Bristol Motor Speedway with an 8th place finish as well as strong runs at Stafford, New Hampshire Motor Speedway twice, Riverhead and the World Series at Thompson running top 5 until an incident with less than 10 laps to go.  Overall, he ended up with a top 10 finish and with 6 of 10 qualifying efforts in the top ten and strong runs at every event he attended. Despite only racing a partial schedule, Ronnie finished 2nd in the season long Rookie of the Year point standings. Ronnie will be a driver to watch on the 2018 NASCAR Whelen Modified Tour.

Other Races- Ronnie filled in his schedule running three races at Thompson for the Jensen owned 79 team, three races at Riverhead Raceway on Long Island NY including a 6th place finish in the Islip 300 for the Bertuccio Owned #2 car and finished the season with two strong runs at the Waterford Speedbowl in his family owned 49 SK Modified.

It was a busy, fun and exciting year for Ronnie and this will be a year that helped open some new doors for his racing career going into 2018.
​
Personally, Ronnie transferred from Nichols College to Bryant University and is a Deans List Junior Majoring in Business with a focus on Entrepreneur and Finance and a minor in Psychology. 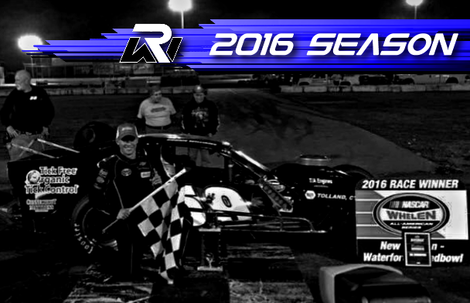 Thompson Speedway-  Competing in his first time full season at Thompson Speedway Motorsports Park driving the Keith Rocco owned #59 Sunoco Modified, Ronnie became an instant threat to win each week.  In 13 feature starts, Ronnie recorded 5 Podium finishes (Top 3), and 12 Top 5’s and only 1 DNF. His tremendous season placed him 3rd overall in the Sunoco Modified point standings and earned him Rookie of the Year for 2016.

New London-Waterford Speedbowl-   Having only made 4 starts at the Speedbowl in 2016, Ronnie made the most of them, earning one the best average finishes of any driver that made at least 4 starts in 2016.  1 win, 3 Podiums (Top 3) and 1 DNF.  Ronnie’s 2016 at the Speedbowl were highlighted by his first career Pole Award (Time Trial winner on August 20th) and earning his first career win in dramatic fashion by passing the legendary Ted Christopher on the final turn to take the checkered flag on September 3rd after coming from the 12th starting spot. Ronnie would cap off his 2016 season by running the big 75-lap SK Modified event at the Speedbowl in October, finishing in an impressive 2nd place to NASCAR Xfinity Series driver Ryan Preece.

Valenti Modified Racing Series-  At the Sunoco World Series at Thompson Speedway, Ronnie got the opportunity to drive the John Jensen owned #79 for his only Tour Modified race of the year.  Ronnie qualified 19th out of 28 car field, and even after having to pit halfway through the race, finished 6th.

Ronnie’s main goal for the 2016 race season was consistency.  Coming off of the 2015 season that had 6 wins but also 7 DNF’s at Stafford out of 17 races, and 1 DNF at Waterford out of 3 races, Ronnie and team accomplished that goal and then some.

In total for 2016, Ronnie participated in 34 SK Modified features at 3 Connecticut Tracks and recorded a victory, 10 Podiums (Top 3), 21 Top 5 finishes and 28 Top 10’s with only 2 DNFs and with Zero DNFs at his home track, Stafford Motor Speedway. 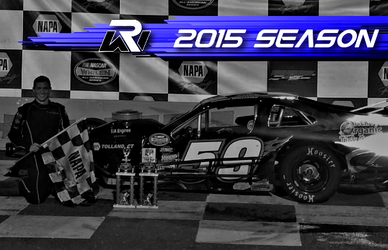 Summary of 2015 Season
- Ronnie had a staggering 6 wins, 9 podiums finishes, 11 Top 5 finishes, 13 top 10 finishes in 2015 at the famed Stafford Motor Speedway, proving to be one of the top up and coming young racers in the country.

- He was voted the Most Popular Driver in the SK Modified division at Stafford Motor Speedway in 2015.

- In 2 years in the SK Modified division at Stafford, Ronnie has won 7 out of the 36 features he has raced in, a 19% winning percentage that ranks among the greats at Stafford over that time period.